Steve Coogan and Rob Brydon in The Trip

Amid all the decadent food and Michael Caine impressions, the four-part series has always had a darker edge.

My grandfather, who died several years ago at the age of 98, was a Turkish archeologist who specialized in ancient Hellenic ruins. He spent almost half a lifetime digging up a long-forgotten Greek town on the Aegean coast of Turkey, a site that happened to be right next to a coal-mining facility. It both tickled and saddened him to see the old world juxtaposed with the new, timeless Greek columns and graves framed against huge piles of black, black coal. He wasn’t much of a romantic, but he did love the poetry and majesty of myth. When I was a child he’d glance out over the horizon, at the ships and sailboats passing in the blue distance, and tell me about how through these very Aegean waters had sailed the navies of Paris and Menelaus. He loved to enliven the everyday with evocations of the ancient world.
(He was obsessed with Troy, and spent years writing a book about it.) I, a snot-nosed kid for much of this time, paid only scant attention to his stories.
Only later did I realize what a gift he was giving me.

So, weirdly, I was reminded of my grandfather as I watched The Trip to Greece, the fourth and final installment of the film and TV series following Steve Coogan and Rob Brydon as they make their way around the hotels and tourist spots and fine-dining establishments of the world. This film (which actually begins in Turkey, in the area around Troy) opens and ends with words from The Odyssey, and at various points evokes the stories of Odysseus and Aeneas as Coogan and Brydon eat, joke, imitate, and niggle their way through Greece. The parallels are inexact and rough, and to director Michael Winterbottom’s credit, the film doesn’t try too hard to adhere to any kind of mythic structure. But what does remain at the end of this final and most despairing of the Trip entries is a sense that the past is never quite done with us, that today’s heartbreaks and passions and tragedies are merely variations on ancient patterns. END_OF_DOCUMENT_TOKEN_TO_BE_REPLACED 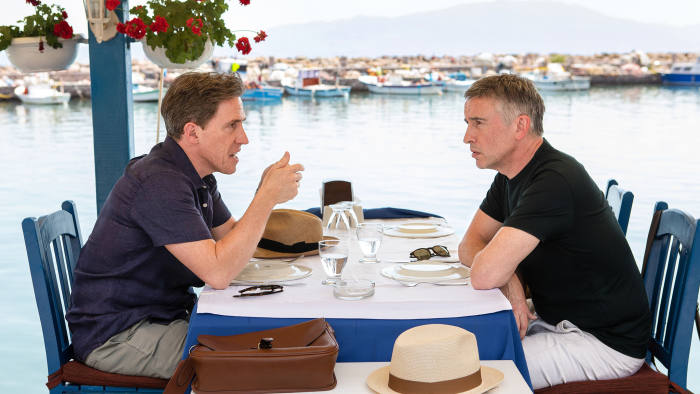 Read review at: Rob Brydon and Steve Coogan back on form in The Trip to Greece | Financial Times

Ever since Seinfeld, story arcs in comedy centred on nothing in particular have grown to become something of a genre standard. No show took that quite as literally as The Trip, starring Steve Coogan and Rob Brydon, which first aired on BBC Two in 2010. The original conceit, and the comedy, were simple: two well-established comedians (and quasi-friends) have expensive meals at fancy Lake District restaurants while doing impressions of the likes of Michael Caine, Marlon Brando and Ronnie Corbett. On paper that doesn’t sound like comedy gold, but something in the chemistry of Brydon and Coogan’s easy banter and Michael Winterbottom’s skilful direction made for an immediate hit.

Sadly, that journey – or, this time, that Odyssey – looks to have reached its conclusion. Ten years, four series and three more countries END_OF_DOCUMENT_TOKEN_TO_BE_REPLACED