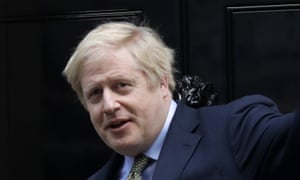 Boris Johnson’s official spokesman refused to criticise Trump directly but made clear the UK government would not support such a course of action, after the US president said he could target 52 Iranian sites if Iran retaliated over the assassination of Qassem Suleimani – “some at a very high level and important to Iran and the Iranian culture”.

Read full story at THE GUARDIAN: UK would not back US bombing of Iran cultural sites – No 10 | World news | The Guardian

Nicola Sturgeon has challenged Boris Johnson to give Scotland the powers to hold a second independence referendum after the Scottish National party won a landslide in the general election.

The first minister said she had won “a renewed, refreshed and strengthened mandate” to call for a fresh independence vote after winning 47 of Scotland’s 59 Westminster seats, 11 more than in 2017.

n the most dramatic result, the SNP unseated Jo Swinson, the Liberal Democrat leader, in East Dunbartonshire by 149 votes, leaving the party leaderless.

Sturgeon said on Friday the Conservatives had focused their campaign in Scotland on opposing a second referendum but had been roundly defeated, hit by a series of losses at the hands of the SNP in seats including Stirling, Angus and Gordon.

“I don’t pretend that every single person who voted SNP yesterday will necessarily support independence, but there has been a strong endorsement in this election of Scotland having a choice over our future; of not having to put up with a Conservative government we didn’t vote for and not having to accept life as a nation outside the EU,” she said.

SNP strategists said the significance of its victory, which has echoes of its remarkable landslide in 2015 when it won 56 seats, was given greater weight by the contrast with the election result in England where the Tories won a significant overall majority.

By comparison, the Tories in Scotland had a very difficult election, holding only six of the 13 seats they won in 2017. Labour was humiliated, losing six of the seven seats they held to the SNP, belying the party’s confident claims in the final week of the campaign it would hold those seats and win several more.

The only surviving Labour MP in Scotland was again Ian Murray, who held Edinburgh South with a significant 11,095 majority. Murray, an arch-critic of Jeremy Corbyn’s, was Labour’s only Scottish MP after the SNP landslide in 2015.[ . . . ]

Alexandra Hall Hall resigned with a blast at the UK government over Brexit, saying she was forced to “peddle half-truths” and deliver politically motivated messages.

A senior British diplomat in the US has quit with a blast at the UK government over Brexit, saying she could no longer “peddle half-truths” on behalf of political leaders she did not “trust.”

In a searing resignation letter delivered just over a week before the UK general election, Alexandra Hall Hall, the lead envoy for Brexit in the British Embassy in Washington, said that she had become increasingly dismayed by the demands placed on the British civil service to deliver messages on Brexit which were not “fully honest.”

“I have been increasingly dismayed by the way in which our political leaders have tried to deliver Brexit, with reluctance to address honestly, even with our own citizens, the challenges and trade-offs which Brexit involves; the use of misleading or disingenuous arguments about the implications of the various options before us; and some behaviour towards our institutions, which, were it happening in another country, we would almost certainly as diplomats have received instructions to register our concern”
– Alexandra Hall

The reluctance of Britain’s leaders to play straight with the public on Brexit, Hall Hall said, had undermined the credibility of UK diplomats abroad. Her position had become “unbearable personally” and “untenable professionally,” she wrote in the letter, which has been obtained by CNN. [ . . . ]

You’re Dead to Me: “Victorian Christmas “