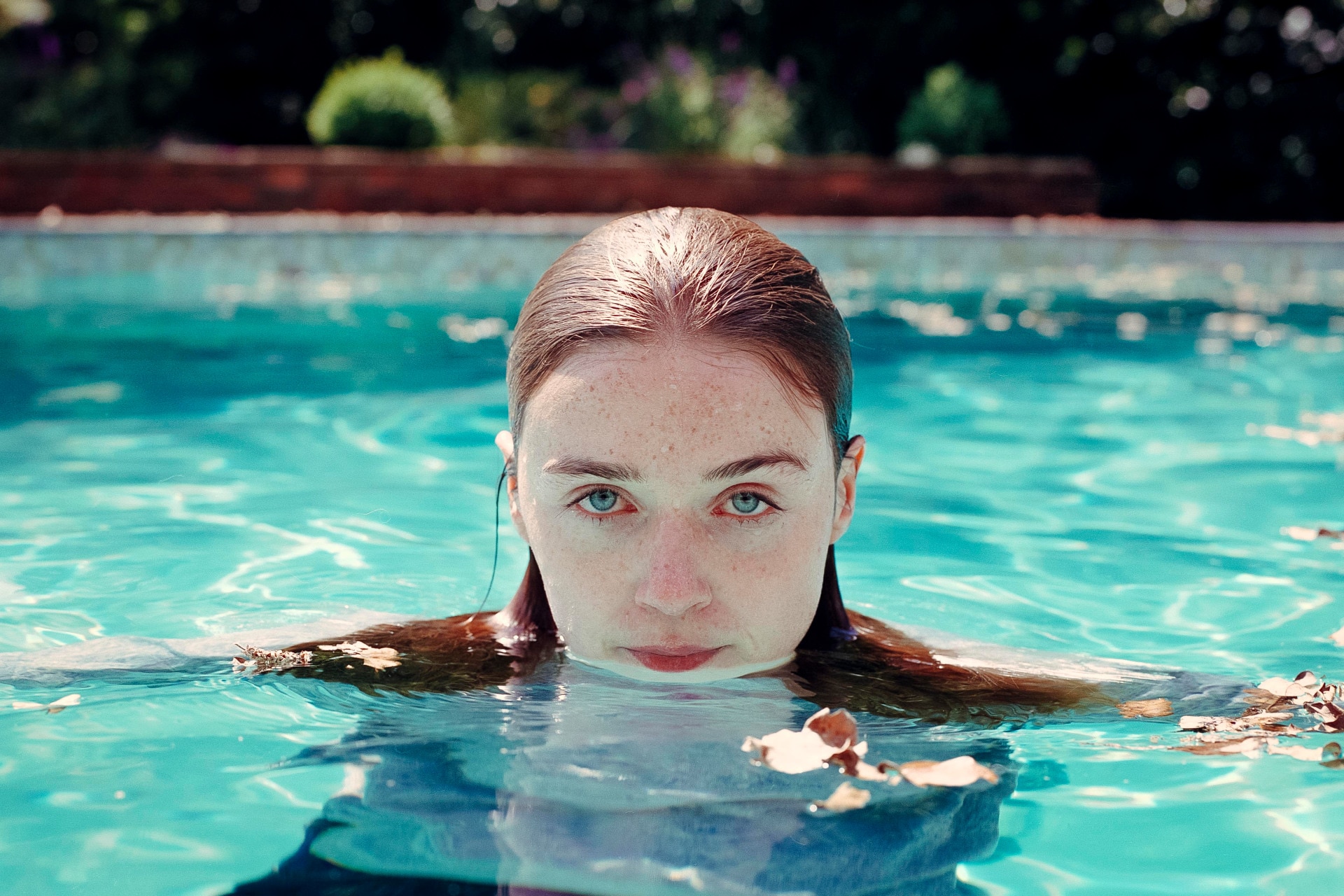 Growing up, Barden always dreamt of being an actor. Landing small parts here and there, she rose to fame in 2017 as unlikely heroine Alyssa in Netflix’s dark comedy-drama The End of the F***ing World, about a teenage Bonnie and Clyde duo who embark on a road trip to escape the mundanities of school work and suburban life.

She’s currently starring in Pink Skies Ahead, which tells the tale of a young girl who struggles with an anxiety disorder after dropping out of school. In a case of life imitating art, or perhaps the other way around, Barden has had her own struggles with anxiety — something she hopes to shine a light on so others don’t feel so alone. Here, she shares her experience.

What was your biggest growing pain?

“I was such a late bloomer. Even when I was 21, I looked about 13. I knew I looked cute but I definitely didn’t feel like I was a woman and I didn’t feel confident. I’ve also really struggled with acne since I was 17. My acne actually came back when I was 25, 26. I was just hit by all the awful parts of puberty really late.”

Getting acne in later life can be challenging. What was that experience like for you?

“It was really embarrassing and painful. I remember when we went to Milan Fashion Week with Gucci and my skin was really bad around that time. The make-up artists were so nice, but they were presuming I was 16 or 17 instead of 25, which made me feel really self-conscious because you don’t feel like you’re a grown-up. On the whole, everybody has been so kind to me. My agents have never made a thing about it which I’m so grateful for. But there were a few times on set where I would hear people saying they’d have to do some kind of CGI on my skin, and you just feel bad.”

Did being in the public eye exacerbate things?

“As a disclaimer, I’ve dropped a lot of money on this acne; I’ve paid a lot of money to fix my skin. If I wasn’t an actress, I actually don’t think I would have done that. I did it because I accept that a certain part of my job is to do with what my face looks like and I didn’t want people to comment on my acne. I wish I was a stronger person to not be bothered by that.”

How did it impact your mental health?

“My acne was definitely tied to my anxiety. When you have anxiety or when you’re stressed out, all your hormones are just crazy, and that gives you acne. It’s a vicious cycle because the acne then makes you have anxiety which makes you depressed. It’s such a bad place to be in.”

You mentioned that acting is so much to do with appearance. Has being an actor made you feel differently about the way you look?

“I’ve always been so aware of what I look like because I’ve always looked much younger than I am. For my whole life I’ve had people commenting on it — usually it’s coming from a good place and people are meaning it as a compliment. My mum is so anti all of that. She doesn’t shave her armpits. She’s one of those types of people where she’s just like, ‘This is what I look like. I’m not trying to prove anything to anybody.’ So I do have that influence in my life. As much as I take into consideration that a huge part of this industry is based on what you look like, I do feel like I have a really good influence from my mum to stay in a healthy place.”

Has Instagram ever played a role in how you think about the way you look?

“People comment on my teeth all the time online because I don’t have teeth that you’re used to seeing on an actress. It used to really bother me — I wasn’t allowed braces because I was in a TV show at the age where everybody gets braces. So I was like, ‘This is unfair!’ But, of course, you can’t explain yourself to people on the internet. I also get a lot of feedback from people saying how wonderful it is seeing somebody that doesn’t look like everybody else on screen. It means more to me that I can be a positive influence on those people than just trying to look like everybody else.”

You’re also a positive influence on people who have anxiety, as you’ve spoken a lot about your experience publicly. What prompted that?

“The first reason I was talking about anxiety online was directly linked to me having anxiety. I was somebody that would always get what I would call adrenaline rushes from certain situations. I’d be like, ‘Oh, this is making me feel kind of nervous and I don’t know why.’ I went from having that, probably for my whole life, to suddenly not being able to get in the car without having a panic attack. It was at this time I started talking about it online, through really not knowing what else to do. I started getting feedback from people online, thanking me for talking about it. I was grateful to them for sending me messages because it made me feel more normal.”

What’s the most significant thing you’ve learned since coming to terms with your anxiety?

“Nearly everyone has anxiety, but what I’ve learned is that it’s going to be different for everybody. I think most people will go through a period where they just want to suppress or deny it. But the sooner you start recognising it and talking to somebody about it, your life is going to get better. It doesn’t have to be a therapist — the beginning can just be talking to a friend, and that’s what it was for me. Now I see a therapist, sometimes twice a week in the pandemic. I’m no longer afraid of getting in the car. I didn’t think I would ever be at that point.”

Besides talking to a therapist, how else do you manage your anxiety?

“I do meditation. I use the Headspace app. I don’t have caffeine — that’s a huge one. I exercise every day — even if it’s for 20 minutes, I’ll run or do some exercise that’s to do with breathing. Controlling your breathing and using your body strength makes you feel so strong. I try and eat healthy. I try not to drink lots of alcohol because whenever I have a hangover, it feels worse. But you know, I’m 27, I’m still going to drink wine with friends. I try and say this to as many people as I can online. I say if they’re teenagers or in their early twenties, just do what you want to do because one day, there will come a time where you won’t be able to. You have to make the mistakes yourself.”

What changes would you like to see moving forwards in regards to the way we talk about mental health?

“I would really like to see a world where mental health is spoken about in schools. Every school should have a safe person to go and speak to. People start feeling anxious at school, but don’t know what to do with it. So by the time they’re 27, they feel like a crazy person. Having anxiety influences people’s decisions. It stops them making the right decisions in their relationships and in their friendships. It lowers self esteem and changes the course of people’s lives. Schools should take responsibility for it.”

You’ve also been sharing a lot about the Black Lives Matter movement on Instagram. How important is it for you to use your platform in this way?

“I have learned more in the past few weeks than I’ve learned in my life. I feel like as an actress and with my platform, I really hope that I have been helping in some way. I’ve been posting everything that I’ve been reading myself.”

Are you hopeful for the future?

“Yeah. I hope that everybody learns from everything that has happened so far in 2020. I hope that everyone will be kind to each other from now on. We practice it in our own home, so why can’t we do it in the world? I genuinely feel hopeful about this; I feel positive that we will be going back into a world where change actually happens.”

Source: The End of the F***ing World’s Jessica Barden on her struggle with acne and coming to terms with anxiety