I’ve been a fan of Jane Horrocks since first seeing her in Mike Leigh’s wonderful Life Is Sweet in 1990. She played the chain-smoking, bulimic daughter Nicola, constantly spitting insults (“Racist!” “Capitalist!”) yet so fragile and in need of love. 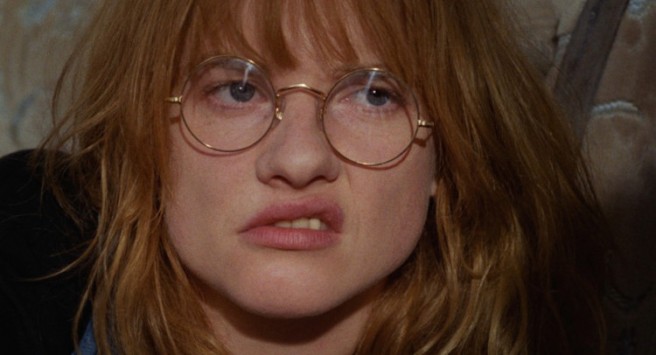 Never Mind the Horrocks (not so clever pun on the Sex Pistols album Never Mind the Bollocks) was a  TV Special featuring the Horrocks as comedian, first broadcast in England on September 1996 . The special also starred a pre Doc Martin, Martin Clunes.

This clip starts with Horrocks as the 1950s-era children’s tv show host “Watch With Nanny” (easily annoyed by puppets yet capable of singing the “Marching Song” for eternity.) Then there’s Horrocks as a modern day “Good Morning USA” host, only slightly more obnoxious than Kathy Lee Gifford. Finally, there’s Horrocks brilliantly playing a pig-tailed teenager phoning her boyfriend on her stairway (“Darren! Get off the phone, I’m on the phone!”)

Horrocks is probably best known as the character “Bubble” in Absolutely Fabulous. She was nominated for a Golden Globe for her work in the semi-autobigraphical “Little Voice” where she  gave amazing singing impressions of Judy Garland, Shirley Bassey, Marilyn Monroe, and others.

She also performed on London stage as Sally Bowles in the 1994 revival of Cabaret. She won a National Society of Film Critics Awards awarded her Best Supporting Actress for her performance in Life Is Sweet.