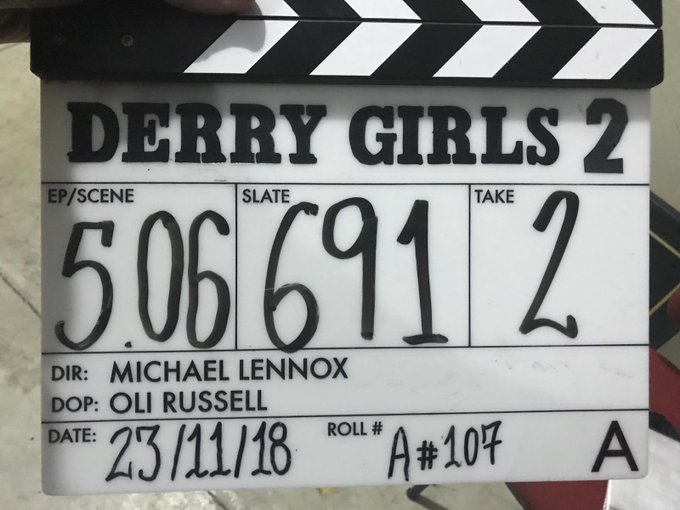 Derry Girls found a new fanbase on Netflix after it arrived on the streaming service in December—and Season 2 has already been filmed, though it hasn’t yet been released.

Derry Girls found a new fanbase on Netflix after it arrived on the streaming service in December. The show, a comedy following five teens attending a Catholic school in ’90s Northern Ireland, originally aired on Channel 4 in the UK. Luckily for viewers on both sides of the pond, Season 2 has already been filmed, though it hasn’t yet been released. Here’s what we know so far:

All the original cast members will be returning, and at least one new cast member may be joining the show. Pop singer Nadine Coyle, who is from Derry, hinted that she may appear in Season 2. In February 2018,  she told the Irish Daily Star, “I’m going to call [creator] Lisa [McGee] today actually, we’re sorting something out for the next series.” That same month, McGee told IFTN that she’d been in touch with Coyle

McGee told Radio Times that Season 2 will show more of the political landscape of ’90s Northern Ireland. “I’m toying with maybe doing the ceasefire and how everyone reacts to that because I remember it actually unsettled people,” she said. “I remember people didn’t know what to do.”

As for the characters, McGee told Radio Times that one of the leads may get into a relationship. She said, “I’d love one of them to get a boyfriend or Clare to get a girlfriend.”

On the Nolan Show, McGee said that Season 2 was currently in edits and is set to premiere in March 2019—on Channel 4, that is. It took eleven months for Season 1 to air on Netflix in the US after it premiered on Channel 4. Hopefully, this time, American audiences won’t have to wait so long!

Derry Girls will get at least one more season, according to actor Tommy Tiernan (who plays Da Gerry). Tiernan appeared on an Irish radio show Today FM (noted by the Derry Journal) and shared, “We’re doing season three and a film, maybe. That’s all up to Lisa, the writer, going off to a shed in London and coming up with all these stories.” Season 3 at least looks likely: In August, Broadcast Now reported that production company Hat Trick was in “advanced talks” for a third season.

Source FORBES: Everything To Know About ‘Derry Girls’ Season 2